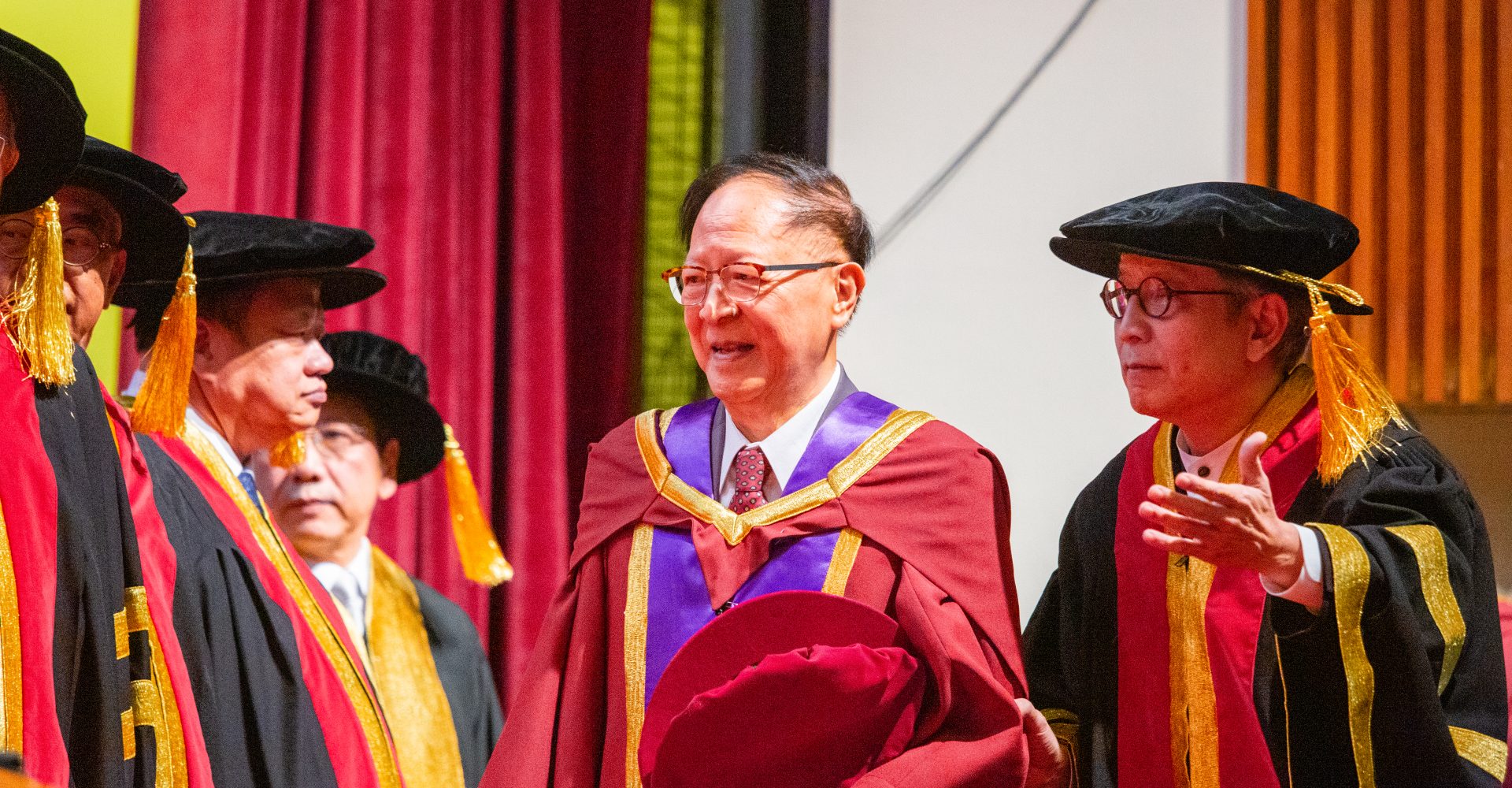 （with English version below）

In 2011 Dr. CHUNG King-fai was conferred the Montblanc de la Culture Arts Patronage Award in recognition of his outstanding accomplishments in theatre and the dramatic arts. All agreed that he richly deserved the accolade and commended him for his qualities of ‘broadmindedness (kuan), solidity (shi), modesty (qing), and congeniality (he)’. Dr. CHUNG was praised for his forbearance towards others while exercising strict self-disciple, and for his pragmatic and committed work attitude; he was also applauded for his modesty and easy-going personality. Those four words – kuan, shi, qing and he, albeit aptly describing his character traits, are yet not adequate to describe his many professional achievements throughout his illustrious career.

In both his life and his craft, Dr. CHUNG has followed the precepts of a true gentleman. While being a celebrated master of his craft, he yet maintains an attitude of modesty. In awarding him the degree of Doctor of Letters, honoris causa, the Hong Kong Shue Yan University honours Dr. CHUNG for his ‘erudition (bo), propriety (li), discernment (zhi) and learning (shu)’.

Dr. CHUNG has not only acquired his knowledge through study, but even more importantly, through practice. Starting from his performance in the production of The Miser for the Red Blue Drama Society of his alma mater, Pui Ching Middle School back in 1950, he welcomed his fate of being ‘married’ to the theatre. After studying in the English Department of Chung Chi College, one of the three original colleges that later formed the Chinese University of Hong Kong, he furthered his studies overseas at Oklahoma Baptist University, majoring in speech and drama. Later he enrolled in a Master of Fine Arts program at Yale University’s School of Drama. During his studies, he delved deeply into the craft and techniques of stage performance. This excellent learning experience helped lay the foundation for building his future reputation as ‘Master of the Dramatic Arts’.

After returning to Hong Kong, Dr. CHUNG took up teaching at the Hong Kong Baptist University. The subjects he taught were all related to drama, the theatre and the craft of performance. He also became a member of the Hong Kong Amateur Drama Society.

Dr. CHUNG joined Television Broadcasts Limited (TVB) in 1967 as Manager (Program and Production) in charge of skits and entertainment programs. He proposed the idea of launching long-running TV drama series. Shortly afterwards he founded the Hong Kong Television Troupe. In 1976, he worked for Rediffusion Television (HK) Limited. A year later he was hired as Principal Artistic Consultant of the Hong Kong Repertory Theatre. In 1983 he became the founding Dean of the School of Drama at the Hong Kong Academy for Performing Arts (HKAPA). He held that post until 2001. In those intervening years he acted in and directed a number of theatre productions, and won a number of awards for his work.

After retiring from HKAPA, Dr. CHUNG entered the next phase of his life by rejoining TVB, where he was responsible for television drama productions. And he remains active even in retirement. An ‘actor of many faces’ he is equally celebrated in academia and the public arena.

Dr. CHUNG’s knowledge and practice blends both refined and popular elements. This is what is meant by ‘broadness’ in his knowledge. Likewise, both his academic training and the experience he has gained by putting this training into practice constitute the breadth and depth of his knowledge and understanding of the dramatic arts.

Dr. CHUNG is a gentleman to all those who know him well or have had the opportunity to talk with him. Indeed, he is a gentleman to everyone. To his students, he is not a teacher but a mentor, never forcing them to learn but guiding them along with patience. Towards both his peers and young people, he is always humble and wears a smile. This is not acting, but the genuine understanding of a gentleman regarding how to make others feel respected and at ease.

When asked questions like: “How would you feel if you were performing onstage and saw someone in the audience yawn or fall asleep?”  Or “How would you react if you were lecturing in class and students were playing with their mobile phones or dozing off?”, he offers the same direct answer:

“I would do some soul-searching and self-reflection!”

Since becoming a master in his field, he is even more modest, always treating others courteously and respectfully regardless of his lofty position.

Although Dr. CHUNG received most of his training in the West, few have learned the traditional Chinese codes of proper conduct and practice it as well as he.

Discernment means the ability both to recognize talent and to know thyself.

In 1983, he became Dean of the School of Drama at the HKAPA.

Holding these two important positions, Dr. CHUNG was able to train a vast pool of theatrical talents and helped inject new vitality into the local drama and theatre circles, increasing the brilliance of the field. Even more important is his keen ability to detect real talent. For example, although actor Lawrence NG Wai Kwok failed to be selected for the TVB Artiste Training Class in 1973, Dr. CHUNG recognized his potential and mentored him, helping him to become the famous star that NG is today. In 1974 he accepted CHOW Yun Fat as a student against the advice of six other members in the judging panel. Another example is Johnnie TO Kei Fung. When Dr. CHUNG met him, TO was doing odd jobs at TVB. But Dr. CHUNG found in him great artistic potential and allowed him to enroll in the training class tuition-free. TO’s glittering career as a well-known film director and producer again proves Dr. CHUNG’s uncanny discernment and TO has certainly not disappointed his mentor. There are many similar examples underscoring Dr. CHUNG’s ability to recognize and foster talent.

He is a true connoisseur of talent in the film and television industry as well as the theatre.

Although Dr. CHUNG has contributed a great deal to television drama, it is the theatre that remains closest to his heart. Drama is magic; it transforms the stage into an enchanted world of gesture and expression. Dr. CHUNG has always been enchanted by the theatre, and remains committed to it even in his golden years. The theatre enables him to know himself, spurring him to unceasingly forge ahead. In short, the theatre is his life

As early as his high school days, Dr. CHUNG was determined to dedicate himself to the theatre. He always knew his own mind. To prepare for studying overseas, Dr. CHUNG worked hard on his English, and as a result was able to delve deeply not only into theatre studies but also into Western literary studies as well.

In high school Dr. CHUNG became familiar with the work of the Russian master of theatre Konstantin STANISLAVSKI. Since then he has assiduously and tirelessly gained theatrical knowledge and skills in the performing arts, delving deeply into the works of such masters as SHAKESPEARE, MOLIERE, Thornton WILDER, Arthur MILLER, Tennessee WILLIAMS and Peter SHAFFER. His plays at the time were almost exclusively adapted from Western literature, the fruits of spending years diligently polishing his English. In university, he began translating foreign plays, a testimony to his profound love of those foreign masterpieces. Moreover, he went a step further by doing thorough research on these works and adapting them for use in local contexts. In 1980, the Broadway musical, West Side Story, was performed on stage in Cantonese for the first time under his directorship.

Western literary works became both the nourishment of his learning as well as the wellspring of his success.

Dr. CHUNG lights up the Hong Kong theatre as an exemplary role model in both words and deeds. His glittering achievements are unique. Now in his eighties, he has a burning ambition as he continues his work of nurturing and grooming young talent. He observes that “At 60 you are not yet old; at 70 you are just beginning to get old; it is only at 80 that you are old”. But, he adds, “I’m not afraid of getting old. Getting old means one continues to grow. Growing keeps a person going and enables him to keep on learning”. He continues, “It is always the case that only when a leaf falls on the ground will it show its brightest colour”. However, far from being a fallen leaf, Dr CHUNG continues to show his dazzling brilliance and vitality. He muses that “Life is really good, and I will use whatever time life can still afford me to do my utmost”. His zest for life and his insistence on always making the best of his career have brought Dr. CHUNG a beautiful life.

Professor HU, for his brilliant contributions to Hong Kong’s performing arts industry as well as to commend him as a remarkable gentleman, I take great honour in presenting to you Dr. CHUNG King-fai for the award of the degree of Doctor of Letters, honoris causa